Characterize Water Use and Forecast Demand

<< Back to Water Conservation Plan Page

The following is a summary of water use by customer class. There are three distinct classes. 1-Residential, 2-Commercial and 3-Institutional (Schools). 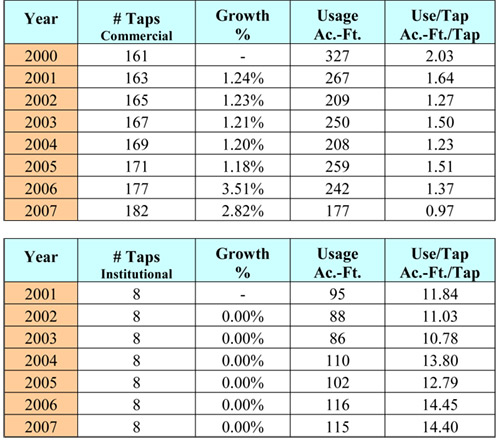 From the above data, it can be seen that the majority of the Residential customers have shown a steady decrease in irrigation use. There is a small increase beginning again in 2005, but subsequent years (2006, 2007) have indicated a slow decrease. It is belief that the summer after the drought (2004) a slight increase occurred since residences were no longer under voluntary lawn watering restrictions. The Commercial customers reflect a similar pattern between 2001 and 2007. The Institutional customers have shown an overall increase in lawn irrigation between 2004 and 2007. This is partially due to the fact that some of the facilities have added new areas which need to be irrigated.

In order to quantify the in-house use vs. irrigation usage, the total use during the winter months (December – March) was used as a baseline to determine average monthly in-house water usage. The following table illustrates the “winter usage” for all use categories. 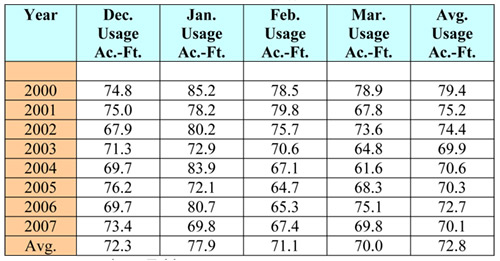 The above Table 2.1b is calculated for all use sectors.

The irrigation use is calculated as the difference of the total use during April through November less the average use between December through March, and yields the following:

The average irrigation water use from 2000 to 2007 is 52.7% of the total annual water consumption. The overall use trend is downward, from 2003 during the extended drought. The irrigation use has continued to lag behind pre-drought years, immediately preceding this period. The following graph explains the total, annual, in-house use and total irrigation use, by calendar year. 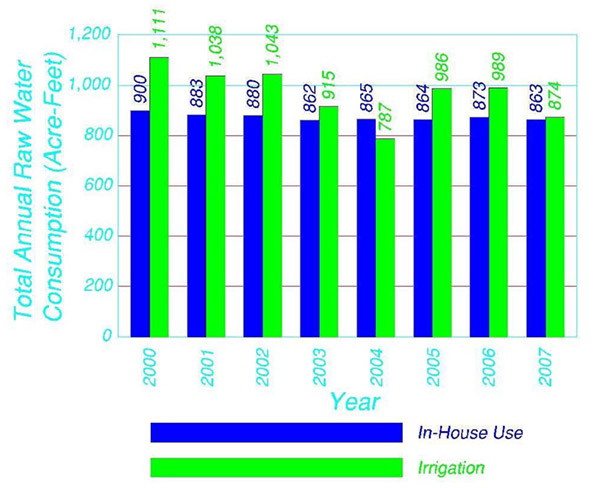 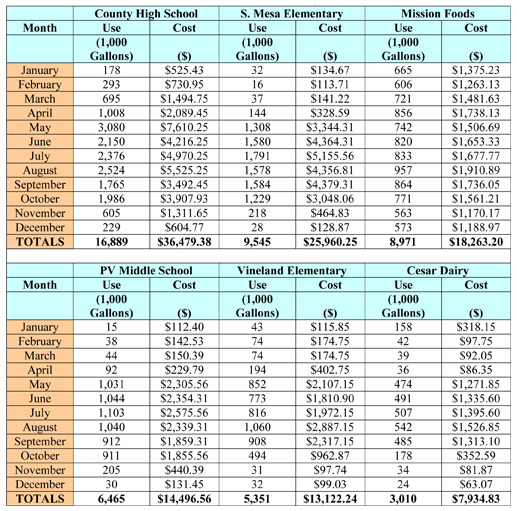 Irrigation of large areas of lawn is the reason for the increased usage during the irrigating season, for the four Institutional (public schools) customers listed above. The exceptions are Mission Foods, whose usage is more directly related to its business operation, and Cesar Dairy, which uses some of its water for cattle watering. The District has provided resources related to efficient irrigation methods to all of these customers, particularly to School District No. 70. During 2002 this information was disseminated as an information packet in the monthly water bills. The following is a summary of the resource information:

All of the above information is available at the District's web site: http://www.stcharlesmesawaterdistrict.org/

Additionally, Mr. David Simpson had individually contacted the Institutional customers during that same period. This limited program met with some success, which can be seen in Table 2.1a, on sheet 8. During 2002, there was a substantial drop in use, from the previous year.

The forecast demand is projected in Worksheet 2-1, by the number of taps, and also by population. The forecast is based on a growth rate of 1%.

The demand forecast shown below is for all users, regardless of type. This does not include any water conservation, other than the voluntary programs which are in currently in place. 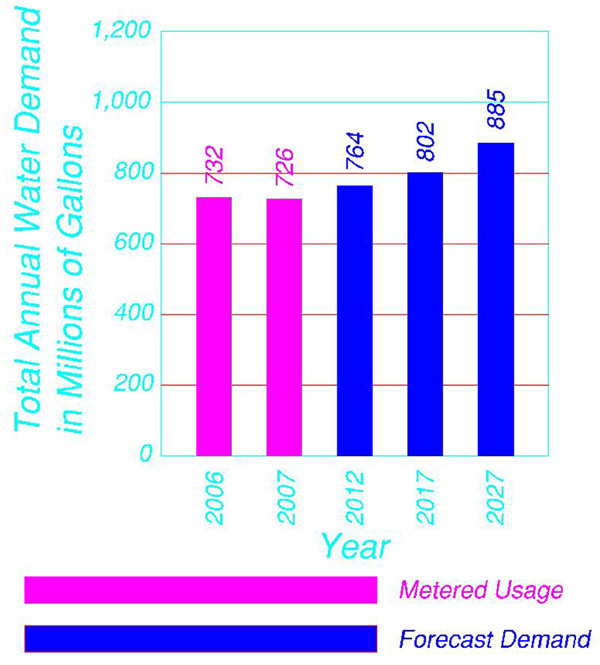 << Back to Water Conservation Plan Page

The SCMWD Board meetings are held on the second Wednesday of every month. The 2023 dates are listed below. The meeting agenda is posted at the District office.

Below are the yearly Consumer Confidence Reports (in Adobe PDF) as released by the St. Charles Mesa Water District.

If you don't have Adobe Acrobat Reader to view the above documents in pdf, you can download it for FREE by clicking the logo below.