Plumbing cross-connections, which are defined as actual or potential connections between a potable and non-potable water supply, constitute a serious public health hazard. There are numerous, well-documented cases where cross-connections have been responsible for contamination of drinking water, and have resulted in the spread of disease. The problem is a dynamic one, because piping systems are continually being installed, altered, or extended.

The following are for Stock Tanks, Sill Cocks and Sprinkler Systems.

The Atmospheric Vacuum Breakers (AVB) is the least expensive backflow preventer. It prevents contaminants from being siphoned into the water line by allowing air into the line when the flow of water stops. AVB's must be installed after every control valve., so an AVB is required for each zone. AVB's must also be at least 6 inches higher than all of the sprinkler heads operated by the valve, for that zone. In a sloped yard, this may not be practicle and a different type of backflow preventer should be used. AVB's do not require annual testing.

Pressure Vacuum Breakers (PVB's) are similar to AVB's, but are able to protect multiple zones at the same time. Only one PVB is required for the entire sprinkler system, but it must be installed 12 inches above the highest sprinkler head. In sloped yards, it would typically be installed at the top of the slope, with a pipe running to it from the water source, and then back down to the valves and sprinklers. PVB's require testing when they are installed and annually after that. A list of Certified Testers is available from the St. Charles Mesa Water District, telephone: (719) 542-4380.

The Reduced Pressure Backflow Preventer (RP) is made of two check valves with a relief valve in between them, making it the most effective backflow prevention system. Only one RP is needed for a sprinkler system, installed on the main line of the sprinkler system, RP's must be installed 12 inches above ground and must have adequate drainage, but they do not have to be higher than the sprinkler heads, so it can be placed anywhere prior to the control valves, and sprinkler heads, making it much easier to hide in sloped yards. Reduced Pressure Backflow Preventers require testing when they are installed, after repairs and annually. This is the only device approved for systems installed with booster pumps. 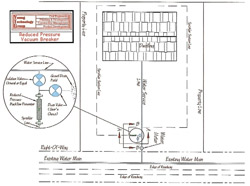 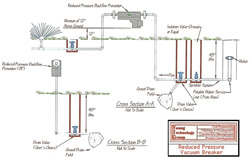 These small devices are a specialized application of the atmospheric Vacuum Breaker. They are generally attached to sill cocks, and in turn are connected to hose supplied outlets such as garden hoses, mop sink hoses, spray outlets, etc. They consist of a spring loaded check valve, that seals against an atmospheric outlet when the water supply pressure is turned on. When the water supply is turned off, the device vents to atmosphere, thus protecting against backsiphonage conditions. They should not be used as backpressure devices. Manual drain options are available, together with tamper-proof versions.

Air gaps are non-mechanical backflow preventers that are very effective devices to be used where either backsiphonage or backpressure conditions may exist. In general, the air gap must be twice the supply pipe diameter, but never less than 1 inch. An air gap does interrupt the piping flow with corresponding loss of pressure for subsequent use. Consequently, air gaps are primarily used at end of line service where reservoirs or storage tanks are desired. When contemplating the use of an air gap some other considerations are: (1) In a continuous piping system each air gap requires the added expense of reservoirs and secondary piping systems. (2) The air gap may be easily defeated in the event that the “2D” requirement was purposely or inadvertently compromised. Excessive splash may be encountered in the event that higher than anticipated pressures or flows occur. (3) At an air gap, we expose the water to surrounding air with its inherent bacteria, dust particles, and other airborne pollutants into the reservoir or holding tank. (4) Free chlorine can come out of treated water as a result of the air gap and the resulting splash and churning effects as the water enters the holding tanks. This reduces the ability of the water to withstand bacteria contamination during long term storage. (5) For the above reasons, air gaps must be inspected as frequently as mechanical backflow preventers. They are not exempt from an in-depth cross-connection control program requiring periodic inspection of all backflow devices.
* Stock watering tanks must have the air gap. *

The SCMWD Board meetings are held on the second Wednesday of every month. The 2022 dates are listed below. The meeting agenda is posted at the District office.